This point was excavated to identify one of the rooms that had been best located in the geophysical surveys and that seemed to have been burned.

We also wanted to check for the presence of a street crossing the camp from north to south, providing access from one of the gates in the city wall to the interior of the settlement. 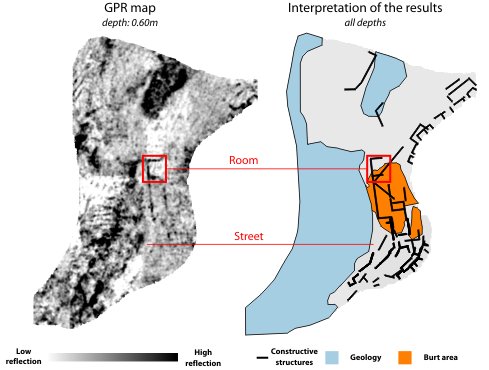 How was it built?

The room was built with walls of rammed earth on a socle of stone bound with mud, like the rest of the buildings from the Roman Republican Period.

The roof, supported on oak beams, was made with twigs and waterproofed with clay.

The room borders on the street to the west and has an opening on the southern side. The fact that the door opens to the south indicates that this room is part of a complex building.

What was its purpose?

The material recovered doesn’t indicate a specific use for the room, as there were work tools (a saw, a pair of loom weights, etc.) as well as ceramic recipients for domestic use.

Two amphorae have been located, one from the south of the Iberian Peninsula and the other from the Italian Peninsula, which speak for the transport of oil, wine or salted products (preserved fish).

One outstanding set consists of a krater, a recipient used for mixing water and wine, and several little drinking glasses. The krater was from Sicily and the glasses from modern-day Italy.

What happened to it?

The room was destroyed during the battle that brought an end to the life of the settlement in the mid-1st century. The evidence recovered at this point is: