Puig Ciutat is a raised plain measuring some 5 hectares (12.35 acres) and connected by a narrow passage to the natural path towards the north-west, today’s road to Olost. The site is divided into farmland and wooded areas, mainly of pine. The excavations were performed on the farmland, although agricultural work has seriously affected the remains in some places. There have been surveys in the three fields that form the plain, but the best-known is the one at the eastern end. Here a wall has been located that stretches from the cliff, to the north, as far as the south-western end of the field, making up an area where one of the entrances to the military settlement of the last stage of the Late Roman Republican Period could have been located. Burnt dwellings have appeared throughout this area, with a large amount of material culture and the presence of missiles such as sling projectiles, catapult bolts, etc. This evidence points to a violent end to the settlement, possibly during the Civil War between Caesar and Pompey’s followers. As regards the two earlier periods (the Iberian and the Late Bronze Age), there is very little structural evidence and no interpretation can yet be made.

The Puig Ciutat site is located in the centre of the municipal district of Oristà (comarca of Osona), at the southern end of the raised plain of Lluçanès. The area is bordered by the Gavarresa stream and one of its affluents, the Olost stream. The entire archaeological area covers a surface area of 5.1 hectares (12.6 acres) at the top of the plain, divided between farmland and wooded areas.

Despite the height of the hill above the two rivers, it doesn’t stand out from the surrounding area as there are other similar elevations in the vicinity. It must have got its importance from the presence of a road, an old ‘transversal arterial road’ communicating the area of the coast and the eastern Pyrenees with the Lleida area and the interior of the Iberian Peninsula.

The work done so far has allowed us to identify three phases: the two oldest are the least understood and can probably be dated to the Late Bronze Age and the Iberian period. As for the third phase, the most modern, this is the one we understand best as it has been extensively excavated. It consists of a Roman Republican settlement, probably a military garrison, attacked and destroyed during the 1st century BC during the Civil War between Julius Caesar and Pompey’s supporters.

The excavations carried out so far have given a date for the destruction of Puig Ciutat at the end of the Roman Republic, possibly during the Civil War between followers of Julius Caesar and followers of Gnaeus Pompeius. The map shows the area of influence of the two sides in the moments before the Battle of Ilerda (49 BC), when Caesar had control over Gaul and Pompey over a large part of Hispania. The regions under the control of the Roman Senate also supported Pompey.

Historical sources mention the movement of Caesar’s troops from Marseille to Hispania via unidentified points of the Pyrenees to confront Pompey’s followers, who had taken up position in Ilerda (Lleida).

Puig Ciutat is located in the area of Lluçanès, a raised plain separating the Ter and Llobregat basins. Although the region has a long history of north-south seasonal herd migration, it’s also clear that there were long-distance routes between the two basins and beyond.

The work of reconnaissance of the terrain and the spatial analysis by the Puig Ciutat team have revealed numerous archaeological sites from ancient times and allowed the start of research on east-west communications in Central Catalonia.

The following image shows a suggested route for the main communications routes crossing Lluçanès in Antiquity and points where archaeological remains have been located. (Source: Cartographic base of the Institut Cartogràfic i Geològic de Catalunya (Cartographic and Geological Institute of Catalonia), accessible on www.icgc.cat). 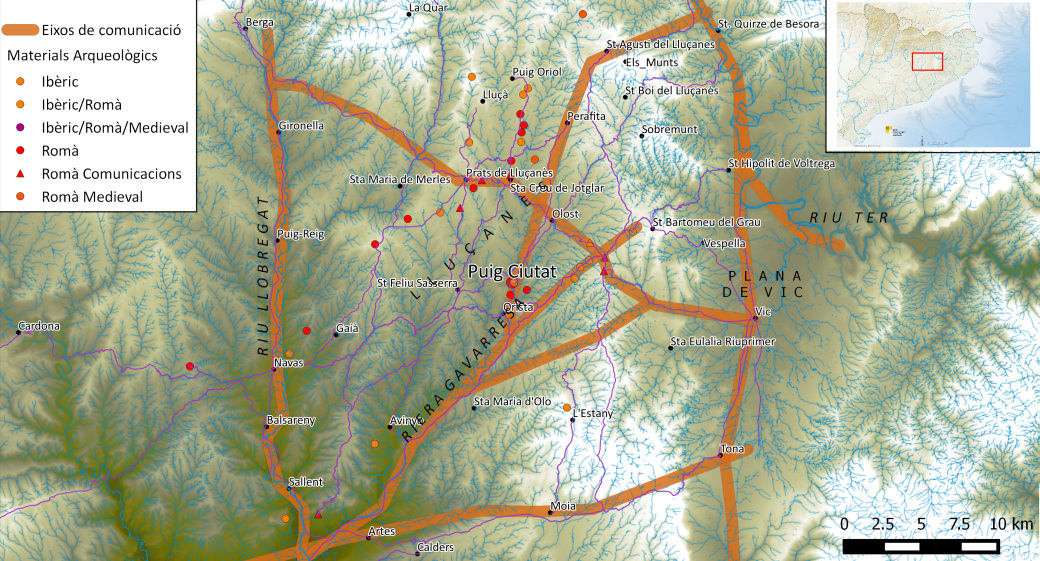 A Game of Strategy

Puig Ciutat stands in a meander of the Gavarresa stream, which provides a natural defence along part of its perimeter but gives it little long-distance visibility. Occupation of this site, then, probably didn’t respond to the strategic advantages of this meander.

What did the inhabitants of Puig Ciutat defend or control? When was it destroyed? At the end of the Roman Republic? Where was it attacked from? What factions could assailants and besieged have belonged to?

As we’ve seen, some of these questions have now been answered thanks to the work carried out so far.

To solve these mysteries, the Puig Ciutat team is applying traditional archaeological exploration as well as geophysical archaeology or remote sensing over a large area surrounding the site.